Born and raised in Sanford, North Carolina, Michael Angel has been mesmerized by the stars as long as he can remember. He grew up in the countryside on a farm where the dark nights provided a clear view of the stars and constellations. Staring up at the night sky, he dreamt that one day he would be an astronaut or an astronomer. However, when Michael was in the twelfth grade, he discovered a love for playing guitar. As someone who becomes very consumed with his passions, he decided to pursue a career as a musician. After a decade of chasing his dream, he remembered his childhood aspirations of becoming an astronomer and decided to focus his mind once again on science, this time enrolling in chemistry. He completed his PhD in Analytical Chemistry from the North Carolina State University and carried out a Postdoctoral Fellowship at the Lawrence Livermore National Laboratory with the well known spectroscopist, Tomas Hirshfeld, eventually starting his own research group before moving back to the East Coast in 1993 and becoming a Professor at the University of South Carolina. Read more below. 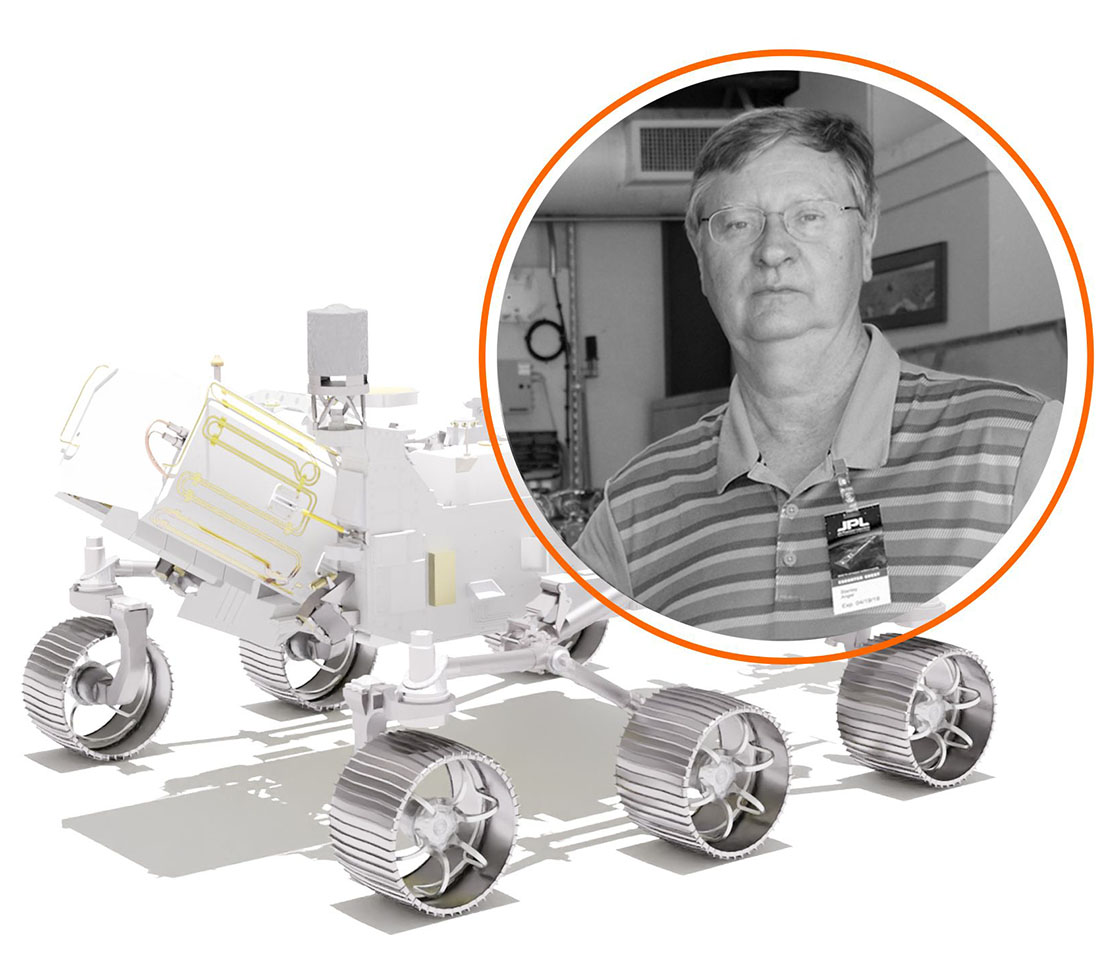 WHAT DID YOU WANT TO BE (when you were young):
An astronaut as a little kid, then an astronomer, later a musician. None of them worked out.

INSTITUTE:
Department of Chemistry and Biochemistry, The University of South Carolina/Columbia

ADVICE FOR FUTURE SCIENTISTS:
If you’re not having fun, do something else.  And, read, read, read!

UNKNOWN FACT:
A curious fact very few people know: The Andromeda galaxy is 6 times larger than the full Moon in the sky—and can be seen by eye. Unknown fact about S. Michael Angel: He aspired to become a professional musician before becoming a Professor.

WOULD YOU GO TO MARS (if it were possible)?:
No, I would die.

MORE IN DEPTH WITH DR. ANGEL

In the mid 1990s, Professor Sharma was also working to incorporate a telescope into a Raman spectrometer to measure samples at a distance. Together, Professor Angel and Professor Sharma developed a collaboration to study, discuss and publish papers on astro-spectroscopy as well as other applications of remote Raman spectroscopy.2,3,4 More recently they have been working on developing a compact Spatial Heterodyne Raman spectrometer, first described by Angel’s group in 2011.5 Minus the laser and detector, this spectrometer is approximately an inch-sized cube and produces high resolution Raman spectra, making it suitable for future explorations not just on Mars but for future missions to Jovian moons, asteroids and comets. They have written many proposals to NASA, which have been successfully funded.

The Raman spectrometer currently part of SuperCam on the Perseverance rover is not significantly different from the original remote Raman system designed by Professor Angel. However a lot of design elements were considered by NASA engineers to minimize the size and increase robustness of the system so it could withstand the shock and vibrations associated with travel and landing on Mars as well as survive the planet’s harsh conditions. Professor Angel credits an incredibly brilliant team of scientists and engineers in the US and France for making this possible, under the leadership of Roger Wiens at Los Alamos National Laboratory and Sylvestre Maurice at the Institute for Research in Astrophysics and Planetolgy (IRAP) in Toulouse, France.

On the Perseverance Rover SuperCam houses several spectrometers including the Raman/LIBS system. Professor Angel explains that the remote LIBS system and remote Raman system have the same basic components with the main difference being the laser wavelength and whether it is focused or not. LIBS gives elemental information (atomic spectrometry) about the measured sample including the amounts of each element using a pulsed laser at 1064 nm to vaporize, atomize and excite. Each element in the sample emits light at characteristic frequencies and the intensity of the spectral lines provides quantitative information. Raman spectroscopy on the other hand does not use a focused laser, which prevents the samples from being damaged. The laser at 532 nm is more gentle and the scattered light provides molecular information about the samples. The Raman laser “tickles” the sample, a term Angel originally heard from Sandford Asher. Angel says, “I don’t know who said this first but Raman spectroscopists like to say they are ‘tickling the tensor’ [a term used to describe the coupling between the laser light and the molecular vibration].”

There are many hundreds of scientists working on the Perseverance mission, which is led by Ken Farley at the Jet Propulsion Laboratory (JPL). When asked how many people work specifically on the SuperCam, Professor Angel said that he personally interacts with more than 50 people on a regular basis. There are subgroups within the SuperCam team (ie. Geology, Acoustics, LIBS, Raman, etc.) and he participates in the meetings for several of them. Angel says, “It is wonderful how NASA encourages everyone on the team, even minor players like me, to get involved and work on every aspect of the mission. For example, I joined several working groups like geological mapping and acoustics, just because I wanted to learn more about different aspects of the mission, and I trained in Surface Operations (Surface Ops) and got very involved early on.” Information is gathered from all subgroups and then implementation discussions take place in order to make decisions about the next steps. With so many people involved he says, “It’s really amazing how smoothly everything goes.”

Professor Angel’s work on the SuperCam team comes in waves. Most often he is only involved in science discussions, however whenever he is involved with Surface Ops, the days can be long, often running late into the evening. The volume of data from Mars changes from day to day, and there are often technical issues associated with downloading data from the rover, so working on Surface Ops can be very busy and occasionally stressful. As sPDL, he assimilates rover data when it arrives at JPL, performs a quick quality-check of the data and produces a “CACHER” report for the SuperCam team. Surface Ops sessions are time sensitive as decisions need to be made quickly on whether sample data is complete or needs to be redone before the rover moves on to another location. When asked what he does to stay awake during his night shifts, Dr. Angel told us that he has a secret formula to give him an energy boost: matcha tea with melted chocolate.

Professor S. Michael Angel is a curious scientist who asks questions about the world.  As a mentor, he encourages his own students to do the same, asking them, “Why did you choose science?” He emphasizes the importance of looking at your surroundings and recording observations. He is someone who transforms obstacles into opportunities. “If something doesn’t work as planned, maybe it will work for some other important need,” he says.

In addition to being a scientist, Professor Angel is a father of two daughters and a musician in a band. You can check out his album on Spotify: American Dream by The Thunder Pigs.

Back to Dr. Michael Angel’s profile. 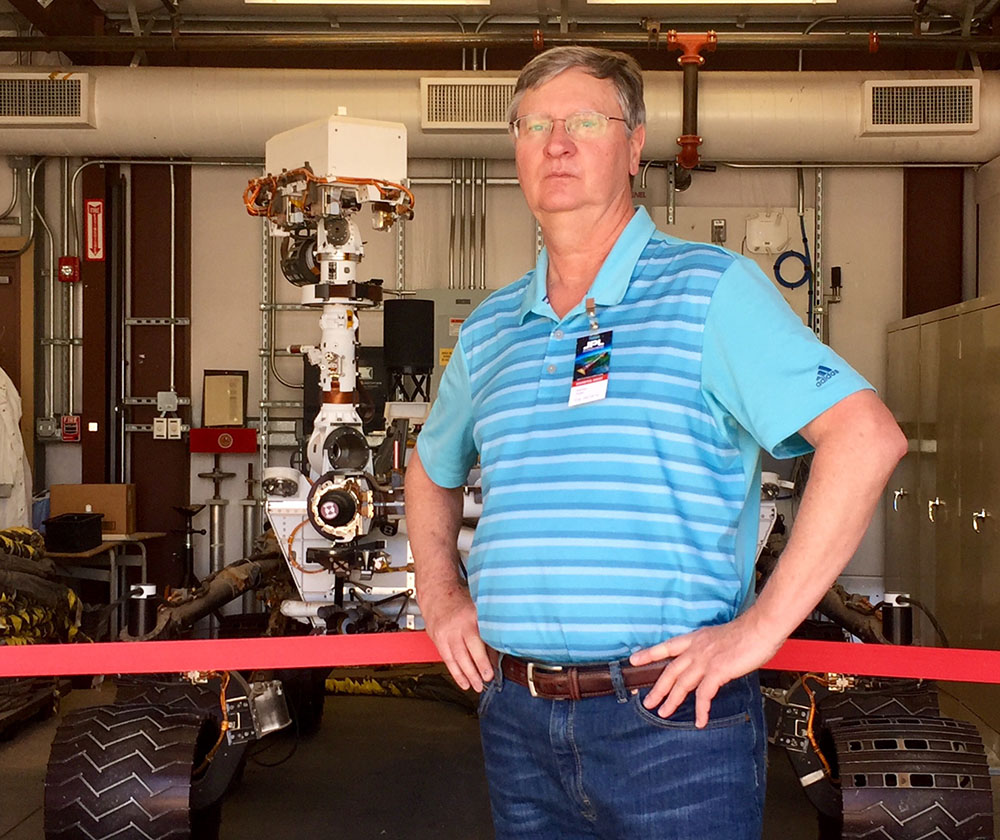 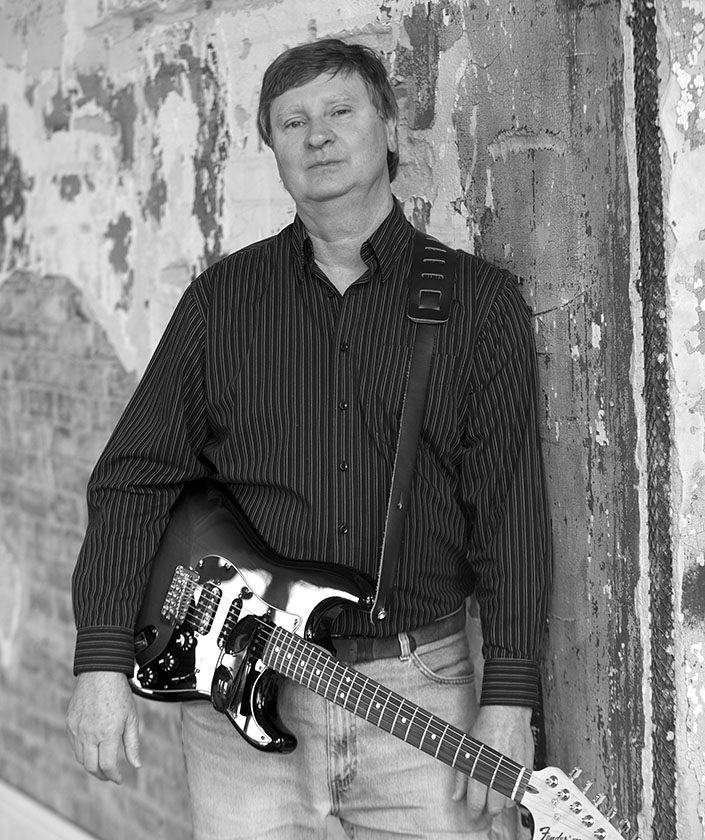 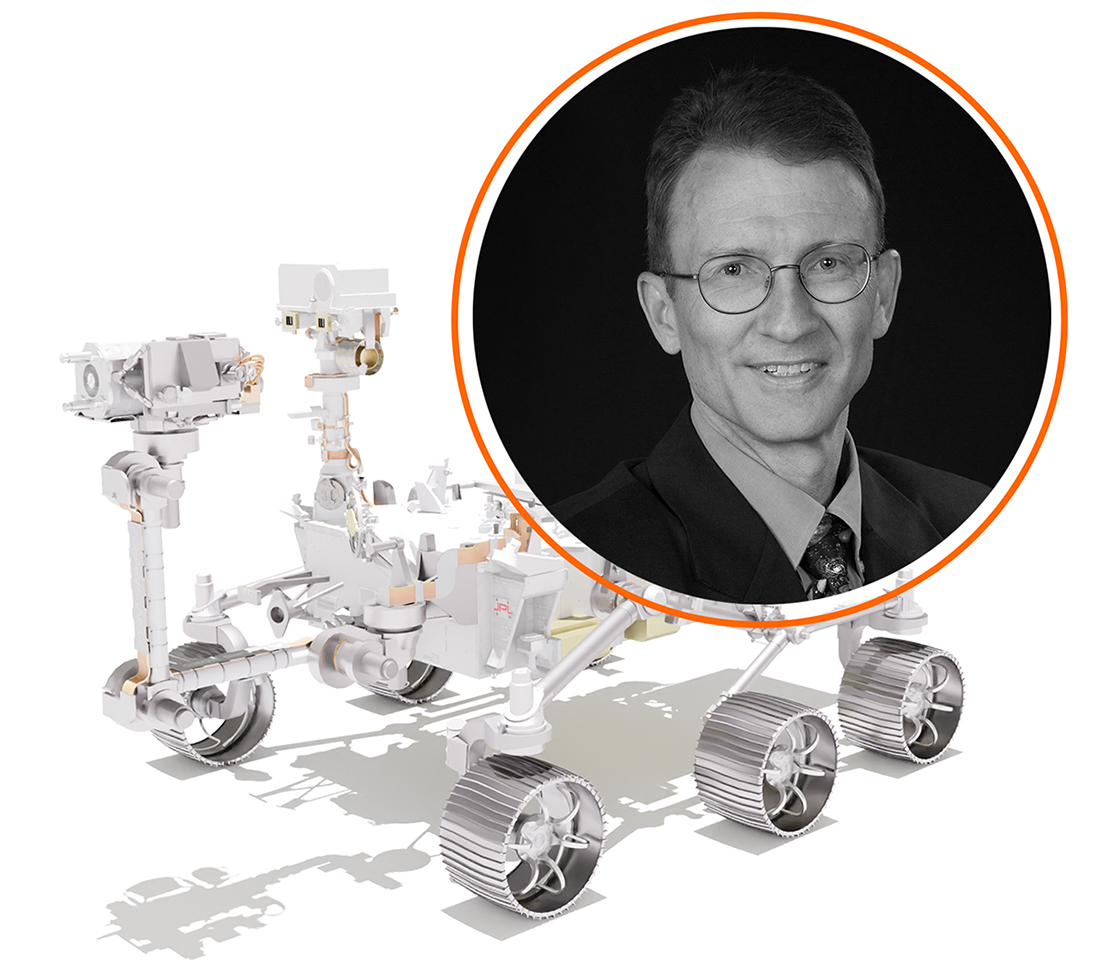 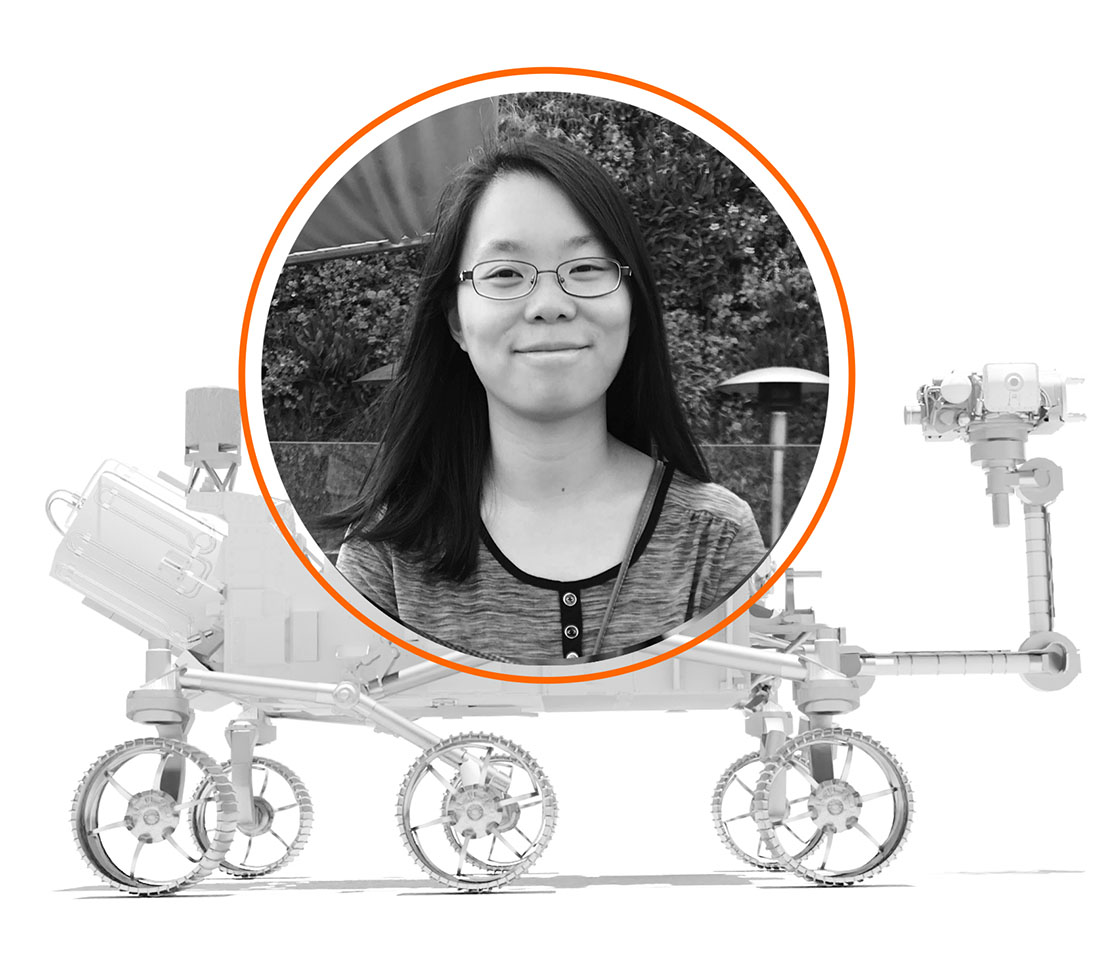 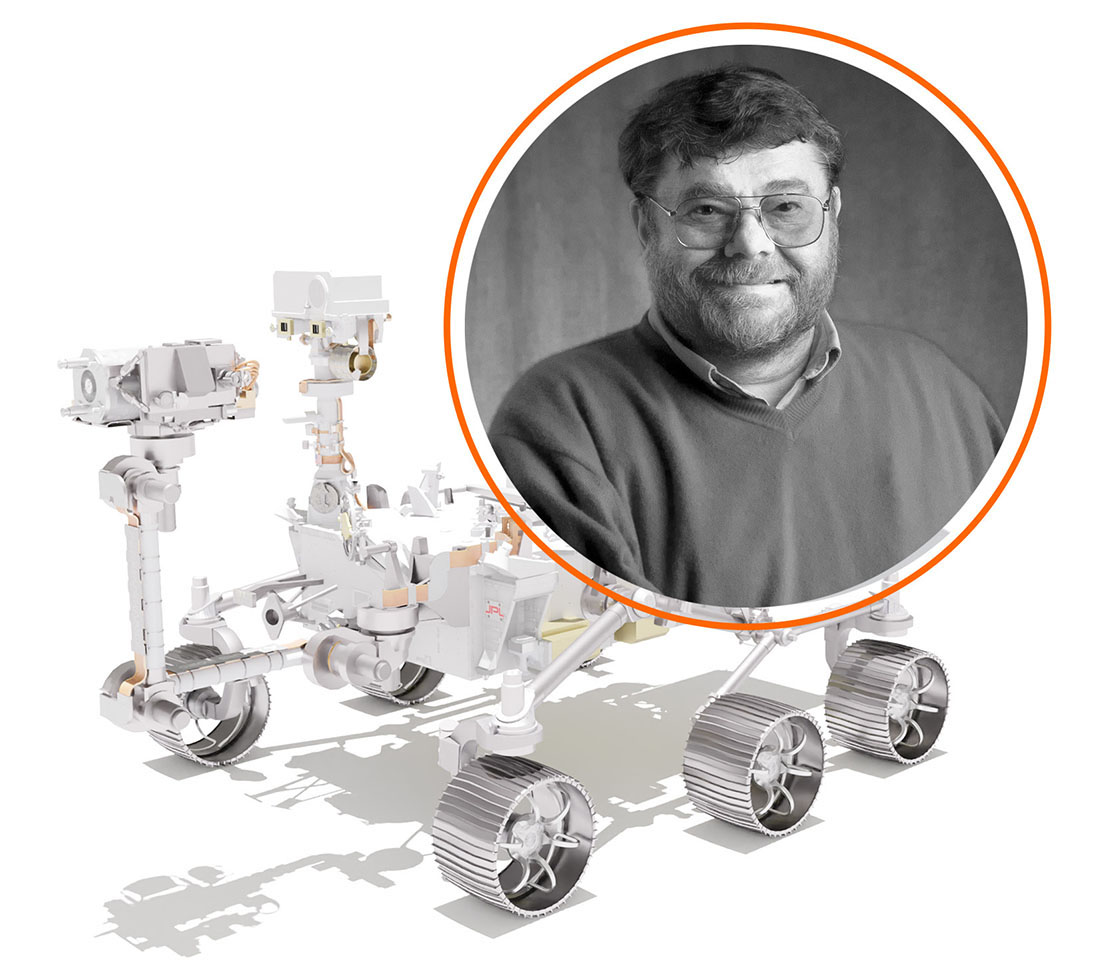 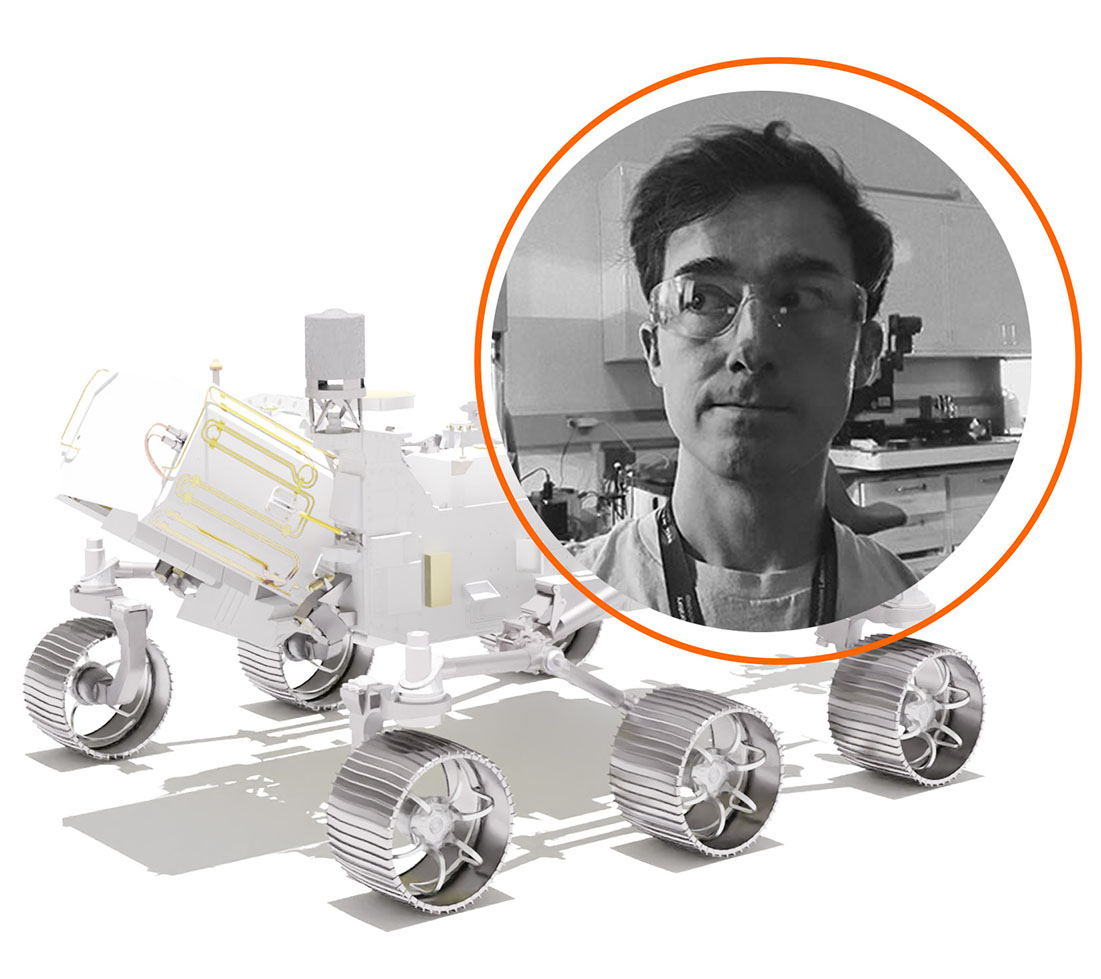 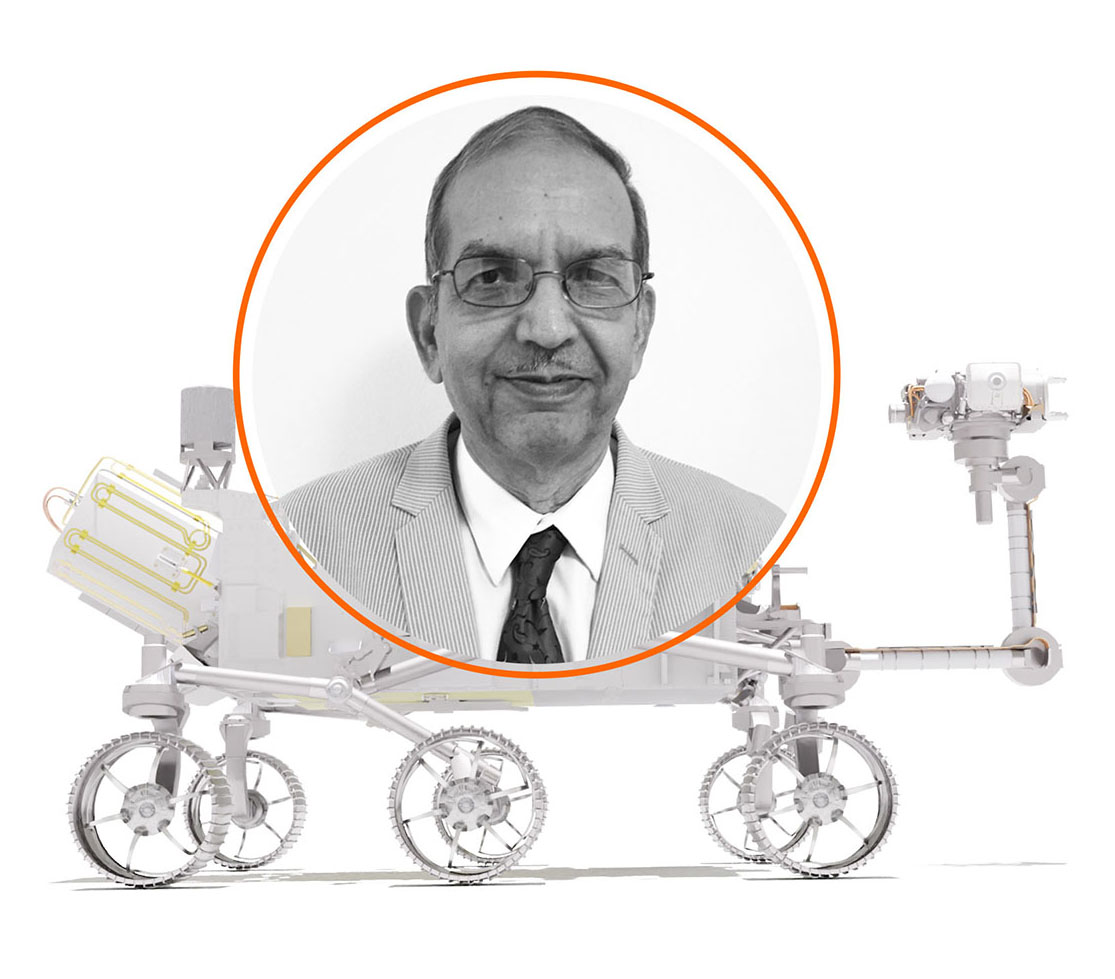